Reframing How We Think About School Improvement

A Perspective on Visiting Team Participation

“I think that participating on a NEASC Accreditation Visiting Team should be a requirement as a licensed educator,” says Bob Bardwell, a school counselor at Monson High School in Monson, MA. Bardwell adds that he knows this is not going to happen, but his statement is evidence of how strongly he recommends the visiting team experience.

Bardwell volunteered for his first visiting team in 2002, a few years before Monson High School was slated to begin its Self-Study. “Being part of a visiting team helped me understand what I needed to do to prepare for accreditation,” he says. But Bardwell notes that this went beyond a sense of figuring out which boxes needed to be checked. “It makes you think beyond whether you have implemented the Standard,” he explains, “to whether you are constantly reviewing and revising to keep improving on your work. You start asking yourself not just ‘Did we do the rubrics?’ but ‘Did we see what worked?’ and ‘Did we tweak them to work better?’”

Bardwell also found value in the peer review process, so much so that he invited five school counseling colleagues to a one-day meeting to evaluate Monson High School’s school counseling work. “I wanted to have people in my profession ask me questions about what we were doing and point out needs that should be addressed,” he says. He was then able to incorporate this information into his school’s Self-Study report. “Some people think of evaluation as punitive, but that’s outdated,” Bardwell says. “NEASC visitors are our colleagues, who are in the same position we are, helping us by asking the right questions and providing an outside perspective on our work.”

Bardwell volunteered for a second Visiting Team in 2013, and points to the opportunity to network with colleagues as another valuable aspect of this work. “You learn so much from the team you are working with,” he says, adding: “We’re spending hours working together and sharing meals and we talk about what we’re doing in our own schools.” Bardwell says that having been through the visiting team process before both as a team member and in his own school helped him to get the most out of the experience. “It helped me reframe some of the things that I’ve been doing in my own school,” he says.

Bardwell adds that anyone thinking about leadership or getting involved in how schools operate should participate on a Visiting Team. “You have to do something like this to see how to go about school improvement,” he says. Bardwell feels that constant review and ongoing assessment is key to getting the most out of accreditation. “It’s work to improve,” he says, “but if I were the consumer, wouldn’t I want my school to be trying to be the best it can? Committing to accreditation says a lot about your school and what you’re willing to do to keep making it better.” He adds that he sees accreditation as essential to work on school equity, helping level the playing field, not just within states but also across them.

Bardwell says that he would like to see an update on the schools he’s visited and how they have implemented changes that were recommended. This kind of investment in other schools’ success is what makes Visiting Team members so valuable to the process. “I would sign up for another Visiting Team,” he says, “Participating in a NEASC visit helps you understand what you should be working on and gives you a different perspective on your work.” 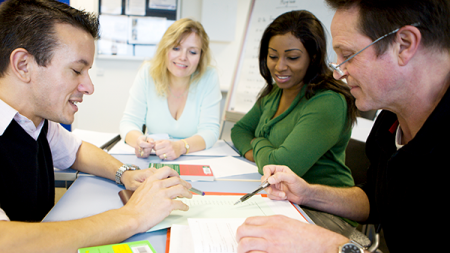 NEASC visitors are our colleagues, who are in the same position we are, helping us by asking the right questions and providing an outside perspective on our work.